My DH went out last night with my sister's husband, my brother and some friends of my brother-n-law's and I was feeling a little bit better while he was gone and did not see sleep happening with the lovely cough I had going on so I vacuumed 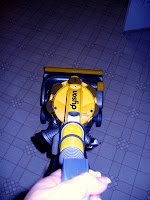 and did some laundry, since it had began a nice mile high pile due to my sickness..ughh 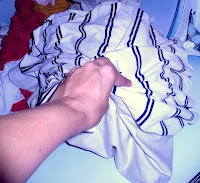 I was testing out the whole if you clean your house you'll be skinny theory I had going on yesterday;) When I was done with everything I made a pot of coffee, because who doesn't need coffee at 8 p.m. at night right? Did you notice the mug, didn't I tell you I heart my puppy:) 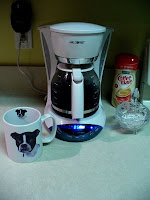 and made Bub some Hot Chocolate, while he was playing a video game. 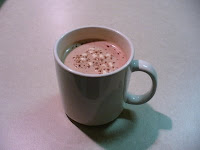 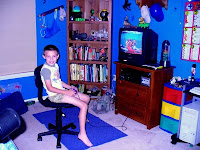 Bub ended up having to shut off the video game because we had a pretty bad storm last night with lots of lightning and he is not a fan of lightning so he made a hideout with blankets and our bean bag under the the couch's foot rests and that is where I found him asleep at 10 p.m. I pulled him out from under the foot rest for fear Ginger might jump down off the couch and pop him in the face. 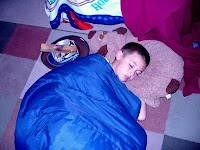 All in all we had a very productive and relaxing time even though I did not go to bed till 1 a.m. because I could not sleep from all the coffee and coughing. Hubby got home at midnight and crashed on the couch, so it must have been a night of fun for him as well, but I bet it did not compare to how much fun we had..ahahaha.
at 9:23 PM
Share