It’s Okay honey we just need to go to the Emergency Room. 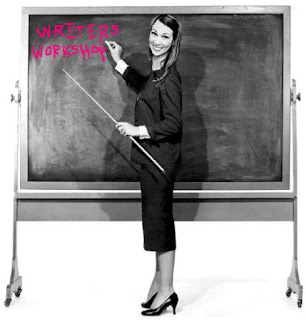 Explain a time there was an emergency. What “mode” did you go into? Freaking out, calm and collected, etc.
When my son was two him and a friend were playing on my exercise trampoline with his cars, using it as a race track. They got really tickled about something and my son was laughing so hard he rolled off the trampoline and right into his mini rocking chair. The one in this pic: 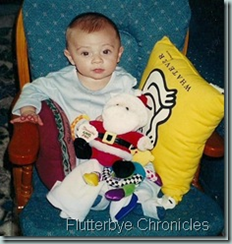 He came running to me crying hysterically and I scooped him up and was holding him to me trying to comfort him. My sister happened to be at the house that day and she was sitting with me holding my nephew and she looked at me and in her best don’t freak out voice she said
“Jennnny”.
I pulled him away from me and all I could see was blood all over the left side of his face and on my shirt.
This was my first Oh My Goodness my child is hurt moment, sure he had boo boos before, but this was not a boo boo there was a gash in my sons head.
I was shocked that I did not panic, I took him into the kitchen and washed the blood away and put pressure on it til it stopped bleeding and then put a band aid on all while I was trying to calm him down saying it would be okay.
In the mean time my sister called the pediatrician, the father of his friend so he could come get him and my Mom since we needed her to ride with us to keep him awake. 30 minutes later myself, my son and my mom were headed to the ER where they put him in a straight jacket, they don’t call it that but that is what it looked like, and applied Dermabond. 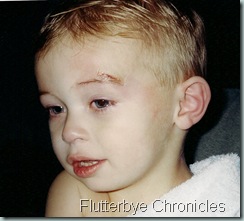 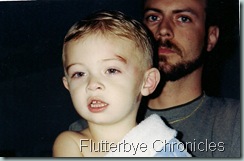 It was a pretty quick visit, but I could have done without the straight jacket, trying to hold a 2 year old still while the numbing agent takes affect was not the highlight of the ER visit let me tell ya. Now he has the just the faintest scar. 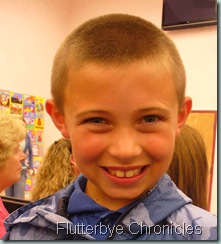