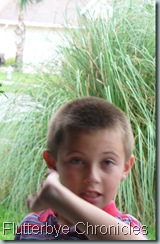 See this huge monstrosity behind my son.  Well there are two of them and the neighbors that used to live in the house next to me planted them for reasons unknown to any of us, they were not very friendly people. I have hated these stupid pampas grass bushes ever since and so have all of my neighbors.  No matter how many times you tell the kids to stay away from them they won’t and they all end up with paper cuts, or the kids get a hold of the feathery plumes they grow and make a mess not to mention snakes love to hide in these things.

Well our current neighbors are great and they hated the bushes as well and for a long time they thought the bushes were in our yard, but when we told them they were actually his or we would have taken them down he decided they needed to go. A couple weeks ago he started to cut it back so it could be taken down, but it has been raining and my neighbor hates snakes and had already seen one coming out of the bush, so they still had not been removed.

So on Saturday night while I was inside with my friend Diane my neighbors John and Suzanne and hubby were sitting outside chatting and my neighbor Suzanne thought it would be pretty funny if they dug up one of the bushes and put it in the middle of our neighbors yard.  I had no clue what they were doing, but I kept hearing trucks and our lawn mower.  From what I was told it was not easy rolling this thing across the yard, hubs actually wanted to put it on their door step, but it was really heavy. Our neighbor had no clue they were doing this, they thought my husband was mowing the grass at 10 p.m.

Me and my friend Diane came outside later and saw this. 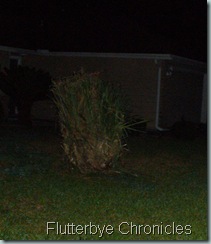 The next morning when we were leaving for church Brad went out and talked to our neighbor and he got a laugh out of it..  Seems their son came in Saturday night and was like there is a bush in the middle of our yard, they both shrugged it off and did not think twice about it til they woke up Sunday morning and took a double take when they went outside and saw it sitting there. 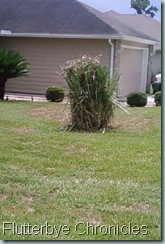 So last night they were discussing what to do with it, at first they talked about burning it, but we all feared we would catch the neighborhood on fire so they decided to cut it up and then proceeded to take the other one down. 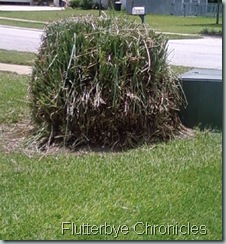 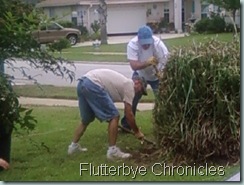 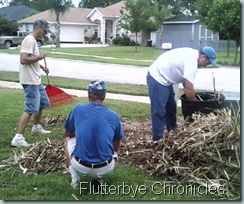 Even our neighbors son got in on the clean up: 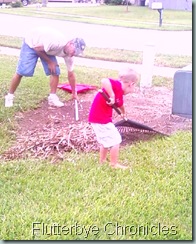 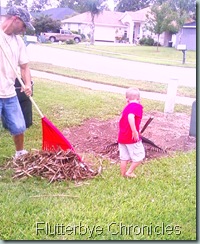 The finished product, I was taking these with my cell so their not the best pics. 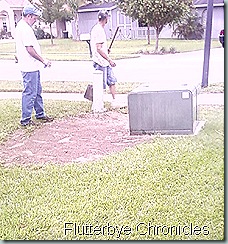 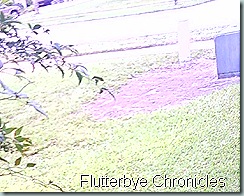